Divorce is not fun. But dating after divorce can be a liberating experience once you’ve healed and moved on from your previous marriage.

According to the Canadian Government, as of 2008, 42% of Ontario marriages end in divorce, so dating after divorce is not uncommon either. If you are recently divorced you’re not alone, it only feels that way, at first. If you are looking for resources to help you through your divorce visit the Divorce Angels, they compile all the best resources and information to get you through this transitional time.

There, that’s the last I’ll say about divorce because there’s no sense in dwelling on the past.

This blog is about dating after divorce, which can be as exhilarating as it was when you were nineteen. Except it’s better now because you have your own place, car and money. Party time!!

Well, not really. Yes, dating after divorce could potentially be a great life experience. But first, take some alone-time to yourself. Rather than dive head first into the dating scene, ease yourself into it slowly. Spend a few months (or more if necessary) being single. Discover what makes you happy and embrace new experiences. The extra alone time will prepare you for dating after divorce.

Immediately after your divorce you might be emotional and feel lonely. That’s you adjusting to a new lifestyle. Resist the urge — if you can — to immediately find a shoulder to cry on in the form of a romantic partner. You’re stronger than you may think. And loneliness is a perception. You’re not alone, you’re free. Free to move forward and begin the great next chapter of your life.

When, and only when, you’re ready to move on, it’s time to embark on the wonderful journey that is dating after divorce.

Practice dating. Go speed dating to help you get back into date-mode. Speed dating allows you to meet several guys on the same night in a controlled environment, test the waters a bit, see what’s out there these days, and remind yourself how easy it is to flirt and mingle.

Then try a one-on-one date with a guy you’re interested in.

And prepare yourself. Know what to talk about on your date.

Talk about your interests, hobbies, books you’ve read or movies you’ve watched. But whatever you do, avoid talking about the following two topics:

1 ) DO NOT talk about your ex. This is dating after divorce, not divorce counselling. There is a time and a place for dealing with the lingering affects of your divorce and on a date is neither.

If you start relating everything that happens on your date to your ex-husband you’ll send that date of yours running for the closest EXIT sign.

And if your ex does come up in conversation, don’t talk negatively about him because it will make you look angry, which is a turnoff, and a clear indicator that you’re not ready to date someone new.

Mike was a good-looking guy who went speed dating with us at Single in the City years back. He didn’t have any luck that night. When the event was over, I was chatting with some of the women who attended and Mike’s name came up in conversation. Apparently, he wouldn’t stop talking about his ex-girlfriend and it landed him zero matches.

The point is, forgive and forget. You can’t love someone new until you’ve moved on from your last love.

2 ) Don’t talk too much about your children, at first. In fact, other than admitting you have children if the topic comes up, refrain from going into further detail about them.

The first few dates are about you and him. Discover each others’ interests. Does he make you laugh? How does he carry himself in public? Does he strike you as a genuine person or does he have his guard up? Get to know a little bit about who he is before he knows everything about who your kids are.

And if he has kids too, that’s great. You and him can relate to each other better. But save the heavy topics for later. Have fun and keep it light on the first few dates. 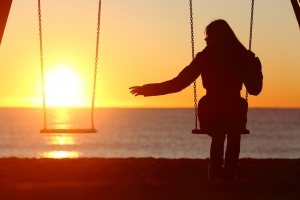 I truly believe that relationships are more enjoyable when they include two people who can genuinely get along with each other like friends. So, try taking it slow with a guy. Do the friend thing for a bit.

See if he’s fun, intelligent, or possesses qualities you’re attracted to in a partner. Find out this information before introducing a sexual element to the relationship.

Discover if you and him share the same goals. If you don’t, it might not work out between the two of you.

For example, if it is your desire to own a house on a quiet street in the suburbs and he’s set on living in a downtown condo, one of you will have to make a really big lifestyle change. You may never be happy in that downtown condo.

Lastly, don’t rush into a second marriage even if you think he’s perfect. At first, you’ll be head-over-heels and years of being married may compel you to convince yourself that you should tie-the-knot again ASAP.

If your relationship is as wonderful as you think it is, you can get married in a year or two. You’ve been married before. What’s the rush? If someone you’ve been dating for less than a year gives you the marriage ultimatum, they may not have the best intentions in the first place. Don’t give in to such a demand. And it’s not fair to make such a demand either. Dating after divorce is fun, so enjoy it, and take your time with it.