Love and Relationship Tips From the Former Bachelor Canada

Love and Relationship Tips From the Former Bachelor Canada

This week on The Dating and Relationship Show on AM640 my co-host Sandra Carusi and I sat down with my friend Damon Conrad of Third Party Entertainment and Brad Smith, Chopped Canada host, former Bachelor Canada star and Toronto Argonaut. Through the show we dished about The Bachelor Canada, tips on being in a relationship, and dating in Toronto. First off, I have to say these guys smell GOOD! If you want to make a great first impression I would take a page out of their book and put on Burbury men, yummy!

Damon and Brad were amazing guests because Damon is single and Brad is in a relationship but they’ve both been single and have dated in the Toronto scene. Both men agreed, dating competition in Toronto is tough, and it’s incredibly difficult to approach women. Just because Brad was the Canadian Bachelor doesn’t mean he isn’t is familiar with rejection. Before Brad was chosen as the most eligible bachelor in Canada he was spending most of his time on the bench of the CFL (his words, not mine) and had to fight to get the attention of women, just like everyone else. He and Damon pointed out that dating in Toronto follows the standard format of dinner and/or drinks, not many cute and inventive dates happen in the city and if you don’t buy a girl a drink at the bar to get her attention someone else will. This blows my mind! If someone wants to talk to you they shouldn’t have to buy you something just to get the opportunity! Not to mention the logistics of it if you already have a full drink! Ladies, get off your high horses (nay, bar stools) and talk to some good-looking men, Vodka-Cran or not! 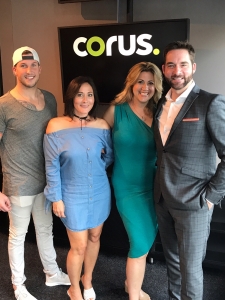 The Bachelor Canada isn’t everything it seems

While dating in Toronto can sometimes be strange, it’s nothing compared to being on The Bachelor Canada. I asked Brad all about his quest to find love and I’m sure it won’t shock you to find out not everything on the show is how it seems. Brad says he knew within 3 weeks that he would be choosing Bianka because she had the qualities he was looking for, but of course knowing so soon doesn’t make for a very spicy show. In the studio Brad let us in on a little secret about his time in The Bachelor Canada Fantasy Suite. For the two girls he knew he wasn’t going to choose in the end he got a little too tipsy on purpose and went straight to sleep, which is a pretty classy move if you ask me. Brad had all the power in that situation but he knew that it’s more respectful to be faithful, even though he hadn’t officially made a decision yet. Brad mentioned that if he had gone on the Bachelor when he was 25 it probably would have given him more of a ‘hot-shot’ attitude than he has now.

Although Brad and Bianka didn’t work out he has found love again, with Miss. America of course! They met when Audra reached out to him on Twitter, which is proof that women should be making moves on guys and love really can be found anywhere! When I saw Brad talking about Audra it’s easy to see how much he loves her, his whole face lights up, they also have the cutest first date story. After they had been chatting online he wanted to set up a date but she was in North Dakota visiting her parents before leaving to compete in Miss. World two days later. So what does Brad do? He hops on a plane to Fargo so he can take her out before the competition. Brad may feel like The Bachelor Canada made him sound way more amazing than he really is but I think that story proves that he is worthy of the title of the (former) most eligible bachelor in Canada!

Do you need some dating advice? Book a date coaching session today!