Dating as a Feminist – The Real Truth

Dating as a Feminist – The Real Truth

Although we’d like to assume the entire world has caught up with progressive views in social equality, unfortunately, that’s not the case. Although our community of feminists are continuing to grow and flourish, there are still certain stigmas attached to the word “feminist” that I intend to break in this discussion.

Trust me, I get it; with all the different political and social views people have these days, it can be difficult to touch upon certain conversations during a first date without offending someone. Nevertheless, while you are entitled to your own opinion, to all my guys out there, there is a way to speak your mind without sounding or looking like an absolute jerk. This brings me to my main point and the focus of this discussion; dating as a feminist.

Dating as a Feminist has its perks

Being a feminist has many perks when entering the dating scene, one of them being the ability to easily weed out all the jerks and creeps. Because we are well aware of the morals and values we seek in a partner, by the end of a first date, it’s usually pretty easy to tell whether or not there will be a second. Not to say only feminist can make these sort of judgement calls, but I would like to believe we are less likely to excuse certain mannerisms and behaviour.

First off on the list to dating a feminist is the whole “splitting the bill” concept. As a feminist, although I believe I am fully capable of paying for my own meal,  that does not necessarily mean I want to. If a man asks me out and we’ve both enjoyed each other’s company, I would like to see my date feel chivalrous enough to want to cover the bill; not because he has to but because he genuinely wants to. Feminist or not, every woman loves a nice gentleman. Ask Men came up with five tips to help you navigate a date with a feminist. 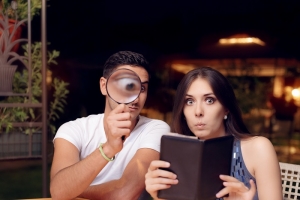 Secondly, being a feminist does not mean I’m a radical one. Often times I feel like when feminist women share their social views with their date, he/she begins to paint this stereotypical picture of them. I know it may seem hard to wrap your head around but a woman can be a feminist and still not mind having their husband make more than them, actually want children more than a nice job, and would rather shave her body hair than let it grow out. These decisions do not signify what being a feminist mean and although as a feminist I can choose to support other women who have made these choices, it doesn’t mean all feminist feel this way. Everyone is different despite our similar beliefs.

Lastly, just because a woman is a feminist doesn’t mean she’s either sleeping with everyone or sleeping with no one at all. This is such a common misconception about woman who are feminist that many still have to deal with. When dating a feminist, you must come to terms with and respect her belief that a woman’s sexuality is her own business and that as long as she is being safe, women have just as much right to enjoy sex as men do. With that being said, simply because a woman shares this belief doesn’t mean she is using it as an excuse to sleep with everyone she meets. On the other hand, if a women dresses and carries herself a certain whist calling herself a feminist, that doesn’t necessarily mean she is a prude either. The point of the matter is, sexuality and sexual conduct has nothing to do with being a feminist. The only assumption you should ever make about a feminist’s sexual conduct is that she supports both sides of the spectrum because woman are entitled to experience both sides without facing scrutiny.

So next time your on a date and your gal drops the F word, don’t be so quick to judge! Be the respectful gentleman I know you are and simply try to find common ground through conversation. Hey, you never know, you may be a closeted feminist and not even know it!