A Work in Progress

I’m going to have to get serious here, I’d be remiss if I didn’t address the huge shift that is finally taking shape, you’ve noticed it; Sexual Abuse will not be tolerated!

I was trying to figure out a way to address this without being too heavy, but it’s a heavy subject. We

have publicly and loudly denounced bullying, racism, discrimination in all its forms, etc., but sexual harassment, which encompasses all these ills of society, is often brushed under the rug because the predators are more powerful than their victims. Well, they’re not anymore and this is welcome news.

Shocking to women who thought they were suffering alone, shocking to those who realize their Mother, Sister, Daughter, Cousin, etc., might have been preyed upon, unbeknownst to them. So there is a visceral rage that is demanding action. It’s raw, it’s been buried forever and is now on the surface, so you best think before you throw out a ‘joke’ that you think is ‘harmless flirting.’

I’m not saying don’t flirt, like I said, the women who are looking for relationships, still want relationships, but men may be very surprised to learn just what women deem offensive. When in doubt ask a sister or a female friend before you make an unfortunate gaffe. 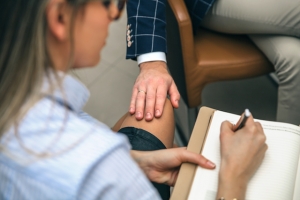 It hasn’t settled yet, there will be changes, and thank God for that, but men are going to have to be a little patient while women navigate this new reality – they are allowed to stand up for themselves and this will evoke different behaviour from different women. Some will go too far, some not far enough, the pendulum may swing wildly until it finds a comfortable place to rest.

There will be more men ‘outed,’ this is just the beginning, and there will be harsh consequences as you can certainly see flashing across your TV screens, but make no mistake, this predatory behaviour happens to women in ALL walks of life, and there’s still a long way to go – but now they/we are empowered, angry and we despair for every victim. Reach out to the women in your life and be the man they need you to be.

It’s not asking a lot to demand men respect women; don’t bully, harass, abuse, rape, or offend them. If you are an ally, your attractiveness just multiplied 100 fold. These are the facts, those are the rules. It’s a brave new world, I’m always here to help you in your dating pursuits, don’t hesitate to ask me about anything you’re unsure of. Remember, mutual respect makes for the best and longest lasting relationships.