Moving to the next step in a relationship and deciding to try and have kids is an exciting time. But more and more couples in North America are experiencing challenges with fertility. In fact infertility impacts one in six Canadian couples and approximately 10 percent of women (6.1 million) ages 15-44 have difficulty getting pregnant or staying pregnant. Because fertility issues are on the rise, I invited Dr. Sheila Wijayasinghe, a family doctor at St. Michael’s Hospital and the medical director of primary care outreach at Women’s College Hospital in Toronto, to speak with us on the Dating and Relationship show about fertility struggles and solutions.

Staying Hopeful: The Process of Conceiving and Fertility Trouble

Dr. Sheila has years of experience helping women conceive and even became a patient herself when she went through infertility treatments before welcoming her baby this past summer. Her and her husband struggled for a year to get pregnant before they consulted a fertility doctor to help them. Even after seeking support it took her 4 years to conceive! This was an emotionally strenuous time in her relationship, and she didn’t truly know what her patients were really going through until she experienced it herself.

Symptoms of infertility are fairly straightforward, but there are so many possible causes. The symptom that indicates fertility issues for men and women under 35 years old is trying to conceive for a year with no success. For people over the age of 35, it’s trying for 6 months without success. Causes of infertility include: no ovulation, structural issues in the tubes or uterus, or causes that are deemed unknown to doctors – but often have to do with egg or sperm quality. Lack of ovulation can be related to hormonal imbalances or problems, structural issues often come from tubes being blocked from releasing an egg, the uterus having fibroids which prevent a fertilized egg from attaching to the uterine wall or cases like Polycystic Ovarian Syndrome, which results in non mature eggs being released and therefore not having the ability to be fertilized. Outside of these reasons, the most prevalent factor/cause is age. Women’s peak fertility period is between the ages of 20-24. However, many women are now waiting longer to have a child, which increases the likelihood to have issues conceiving. Not only will this limit the possibility to conceive, but the longer a woman waits to have a child, the more likely it is that the child will face development and chromosome issues – especially if the woman is over 40.

I asked Dr. Sheila if there are any outside factors related to fertility struggles and she said that smoking of cigarettes or marijuana can affect egg and sperm quality. So can the frequent use of hot tubs for men, and the regular wearing of tight pants/underwear. Though all of these causes factor into conceiving, Dr. Sheila told us about some of the treatments available from fertility clinics. She says that before going through any 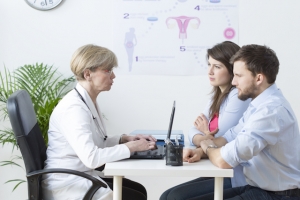 invasive techniques, there are medications that women can take which release more eggs to increase the chances of fertilization. Other than this, there are assisted reproductive techniques such as IUI (Intra Uterine Injection), which guides the sperm into the uterus through a catheter during ovulation. The success rate for this method though is only 12-15%. In moving onto the more invasive procedures like IVF (Invitro Fertilization), there is a higher success rate of 40-60%. This method requires surgery to retrieve a woman’s eggs and fertilize them with sperm outside of the body and then implant them back into the uterus. Though this technique yields a higher success rate, it is one of the most invasive procedures since it involves surgery, and can cost $10,000-20,000 per try.

Since assisted reproductive techniques take a lot of time, effort and emotional challenges, I asked Dr. Sheila about the affects infertility can have on our relationships. Unfortunately it is true that fertility issues in couples cause a higher risk of separation and divorce. And Sheila has seen many cases of this. Negative emotions arise throughout the process that your body has failed you or your partner’s body has failed the both of you. In this case, if negative emotions are getting too intense during the process, Sheila suggests it can be beneficial to take a step back from trying so hard to conceive and taking some time to focus on each other and the relationship again. This is important since not only will there be tension between you two, but outside relationships can suffer as well. Women tend to get more support when going through something like this; however, women also tend to carry more of the burden since pregnancy is seen as a woman’s role and problem. Similarly, if the fertility issue is related to the man, it can be a very hard time socially for him since male fertility issues tend to carry a lot shame and stigma, so men are reluctant to talk about it and seek support. The reality is though that 20-30% of fertility issues are related to men. Similarly there are treatments men can undergo such as the spinning of sperm to find the fastest swimmers to use.

Since people (especially women) are waiting longer to have kids, frozen egg or sperm banks are a good precautionary step to increase the chances of conceiving in the future. Before, freezing eggs was mainly for medical reasons; such as if a woman had to undergo radiation in the pelvic region, she could freeze her eggs to use after cancer treatments were done to avoid harming them. Now people seem to freeze their eggs for social reasons such as age. Some women are career oriented and haven’t found a partner yet but want to be able to have a child in the future, so they freeze their young eggs to use later. The science and process of freezing eggs has become much better so that eggs can be frozen for almost forever without harm. This can be a great option for many women, however the cut off age for harvesting eggs to freeze is 38 due to the risk of developmental and chromosome issues in older eggs.

Struggling with fertility is an issue more and more couples are facing, however, there seems to be more hope in treating issues and having the family you have always wanted. To hear more of my discussion with Dr. Sheila about patient rights in fertility clinics and how to give someone you know the best support at this time visit www.640toronto.com. Want more dating and relationship advice? Subscribe to my Youtube Channel!