I was talking to the guy at the fish counter at the grocery store about Single in the City and I asked him if he had any ‘bad date’ stories, of course he did, don’t we all? He told me he had several and that he couldn’t believe how women acted these days. I’m going to give him an alias to protect the innocent, let’s call him Jimmy.

Jimmy is Italian, about 28 if I had to guess. He told me about this girl he went on a date with for the first time. He didn’t know her very well, having only met briefly at a coffee shop in the middle of the day. The shop was crowded, he looked around and saw an empty chair at a table occupied by an attractive girl, he asked if she would mind if he sat down, she didn’t.

They started talking and he thought they had a lot in common, so he asked her out and she accepted. They decided to meet at that very coffee shop on Saturday night at 7:30, from there they would hit a Salsa club. He was really looking forward to their date, she seemed lovely, and he wanted to know everything about her. He spent more time than usual getting ready for their date because he wanted to make a good impression….that was time he’ll never get back.

When she arrived at the coffee shop she ordered a coffee with 2 Sambuca chasers, this took Jimmy by surprise, but it was Saturday night, maybe she had a rough week, or maybe she was nervous about the date, so he put it out of his mind.

Then, on the way to the Salsa club, she pulled a joint out of her purse and asked him if she could smoke it in the car. He said no of course, and told her to wait until they got to the club to smoke it, which she did on the way from the parking lot to the front door.

When they got into the club she ordered 4 shots of tequila. The contrast between the graceful Salsa dancers and his sloppy drunk date was apparent to everyone. 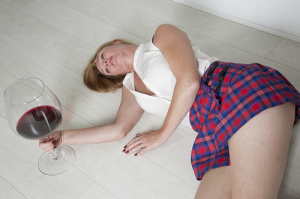 She was slurring her words and stumbling, to say she was ‘ feeling fine’ would be an understatement. He couldn’t wait for the date to end.

Finally, at the end of the night he drove her home being careful not to speed because that was all he wanted to do. When they got to her place she invited him up for a ‘night cap.’ Jimmy politely declined saying he had an early day but offered to walk her to her door to make sure she got in alright. She was offended that he didn’t want to go up to her place and let him know it. She told him she could make it into her house just fine, that she didn’t need a chaperone, especially a ‘pussy’ like him.

As he watched her fall up the stairs, losing a shoe on the way, he thought of Cinderella and realized that Prince Charming dodged a bullet in this first date disaster!

I have said this many, many times; keep the drinks to a minimum on the first date, 2 maximum. I am not saying don’t be yourself, but the first date determines whether or not a second will even be considered, nobody’s invested that much, it’s easier to walk away after the first date than the second, or third. If you are someone who likes to drink a lot, that’s fine, but make sure you make that clear to your potential date.

Laura’s Summary: Don’t put ‘occasional drinker’ or ‘social drinker’ on your profile if your consumption is copious. A lot of dating disasters could be avoided if people were more transparent about these things.
And don’t stop sending your stories, I look forward to reading more of them! Email your stories to: laura@singleinthecity.ca

About the Author: Erica Jackson