Does Marriage Freak You Out? | Marriage & the South Asian Community

Does Marriage Freak You Out? | Marriage & the South Asian Community

Marriage Shouldn’t Be a Contest

The ‘M’ word in this case is referring to the aftermath of that event where you exchange rings and promise to love each other until death parts you, also known as marriage. Often times we find ourselves comparing our personal lives with other people. When you are single, everyone else around you seems to be in a happy and healthy relationship. However, even after you have found your perfect match and seem to have settled down, it still isn’t quite enough. Now you are wondering if you should take the next step and tie the knot, but for some reason the idea of marriage does not give you a warm, fuzzy feeling inside. Don’t feel bad if you are in this position. Sometimes the pressure is coming entirely from outside sources or the stigmas that have been associated with marital status. It is important to acknowledge this fact in order to relieve some of the pressure you may be putting on yourself as a result.

On the Dating & Relationship Show I sat down with Daniel Pillai, LGBTQ activist and host of Date With Daniel along with Meera Estrada founder of Fusia Media. They gave me some insight as to what it was like growing up in the South Asian community and dealing with the struggles of gender, sexual preference and of course Marriage. After speaking with them, I concluded that there are a few significant factors that play a big role in how we view marriage and why our stress levels may sky rocket when entertaining the idea.

You would never expect such betrayal from the same entity that brings its fair share of pleasure and enjoyment but unfortunately, the media cannot be overlooked. If you turn on the television before noon, it’s possible you might catch some reruns of ‘Say Yes To The Dress’ or ‘Four Weddings’ (I honestly love 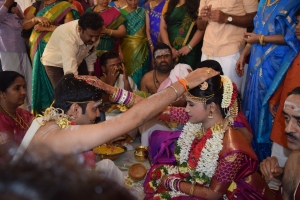 both those shows). Even on commercial break, while wandering off to refill your cereal bowl, there are images of happy domesticated couples making dinner, playing board games or attending kids soccer tournaments. You know… typical marriage activities. We’ve been shown that patriarchal societies are the ones that function with the most stability, men should aspire to be husbands and women should aspire to be wives.

When we attempt to fit into these respective roles, it is hard for us to be fulfilled in life. It is important to know that being married is about finding love and making a commitment. It should not be viewed as an achievement or a need to conform to societal standards.

I asked Daniel if he ever felt the pressure to be married and if there was more difficulty approaching the topic due to his sexuality. He said that his parents would’ve rather not discussed him being gay at all. It was not something you talked about in his culture. He didn’t feel the need to declare his sexuality, but that doesn’t mean that he didn’t still face scrutiny from some of his family members. He described being bullied by his father for not doing things that a heterosexual male would do. He also explained that in his culture, people often operate with a community mentality that causes them to worry about what others think. They are very prideful and try to prevent their children from causing any embarrassment to the family by choosing a different path. However, this didn’t deter Daniel from the idea of marriage and he still continues to keep an open mind and an open heart when it comes to his family being accepting. When asked how he dealt with all the pressure, his response was: “I Don’t. I was very sure of who I was, It is not just about your sexuality. You need to be confident in everything that encompasses who you are as a person”

This is a powerful and friendly reminder that being comfortable in our individuality is what makes us unique. We cannot live up to the expectations of others, even if we are afraid that our choices might disappoint the ones we love. You are the one that will live with your decisions, not them, so it is okay to put your own happiness first and do what’s best for you. When it comes to marriage, making that lifelong commitment needs to happen organically, on your own clock and on your own terms.

The Fear of Divorce

Divorce can seem like an ugly word and possibly be even scarier than the ‘M’ word itself. But why is divorce such a taboo? Meera explained that in her culture, divorce meant that you were severing a relationship between two families and not just two people. You are failing to uphold your family honor when you make the decision to call it quits. I’m certain that many people feel the same way if they were brought up in a home with strict views on marriage. Of course, there are other reasons why people fear divorce. The thought of losing half of your assets or breaking up a family is devastating. The stress of having to relocate and uproot your entire life, walking away from the person you promised to spend forever with, is not an easy pill to swallow.

Sometimes people focus so much on what could happen instead of just trusting their gut instinct. You should never allow fear to prevent you from doing what you want. Having that mindset would’ve prevented some pretty great things from happening in life. You wouldn’t have learned how to ride a bike or drive or car. Nothing in life is for certain, including divorce. Just because it happens doesn’t mean it will happen to you.

Remember, the ‘M’ word is not a bad word! It is just your perception of the word that needs to change.

To listen to this episode and past episodes check out The Dating and Relationship Show.