Laura Gets Hand Scanned and 3D Printed at MY3DAgency

Laura Gets Hand Scanned and 3D Printed at MY3DAgency

Anyone who knew me growing up knows that I was obsessed with Barbies.  Today they’re more diverse, but when I was growing up my dolls were all blondes.  And I knew they represented tall women –  taller than I’d ever be, which was a total buzzkill. Although Matel hasn’t yet decided to make a “Single in the City” Barbie, I’ve got something better now anyway; an exact replica of me made by 3D printing at MY3DAgency in Toronto. 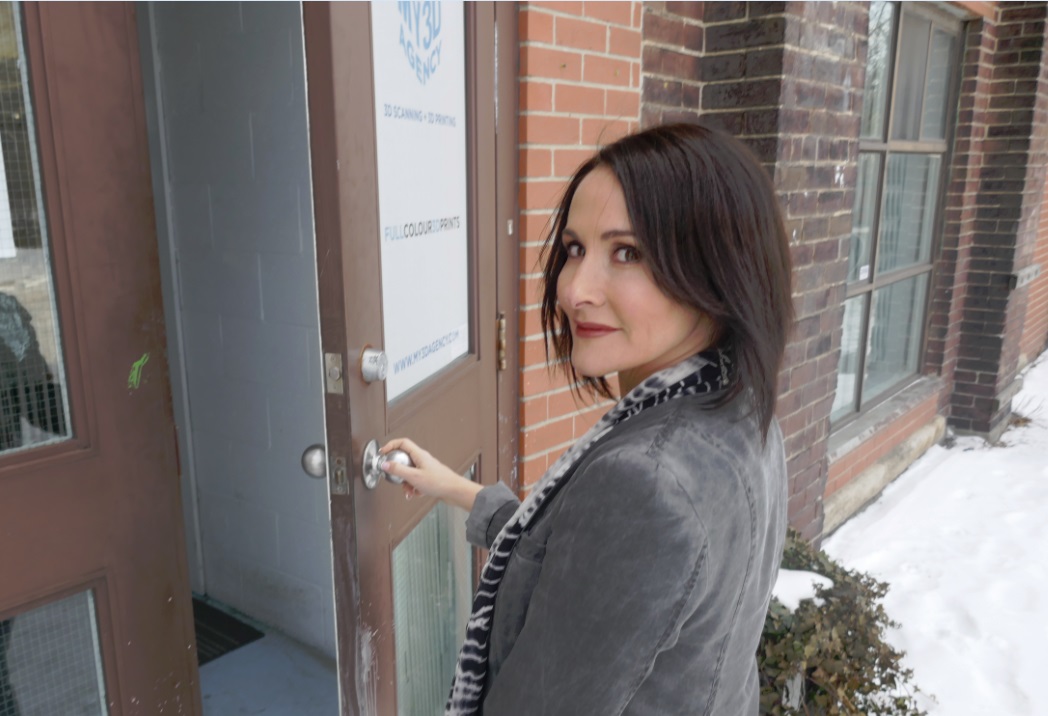 Laura Bilotta outside MY3DAgency at 5 Dickens Street in Toronto.

I’m going to walk you through my amazing experience; I was scanned and then watched myself being replicated as a six inch statue!  Making your own mini-me cake topper begins with 3D scanning to make a three-dimensional print file to send to a very specialized printer, and all of this happens at #5 Dickens Ave in Toronto (near Dundas and Logan in Leslieville).

Michael Gossack owns the shop; he’s a brilliant engineer who I wish was single so that I could set him up! 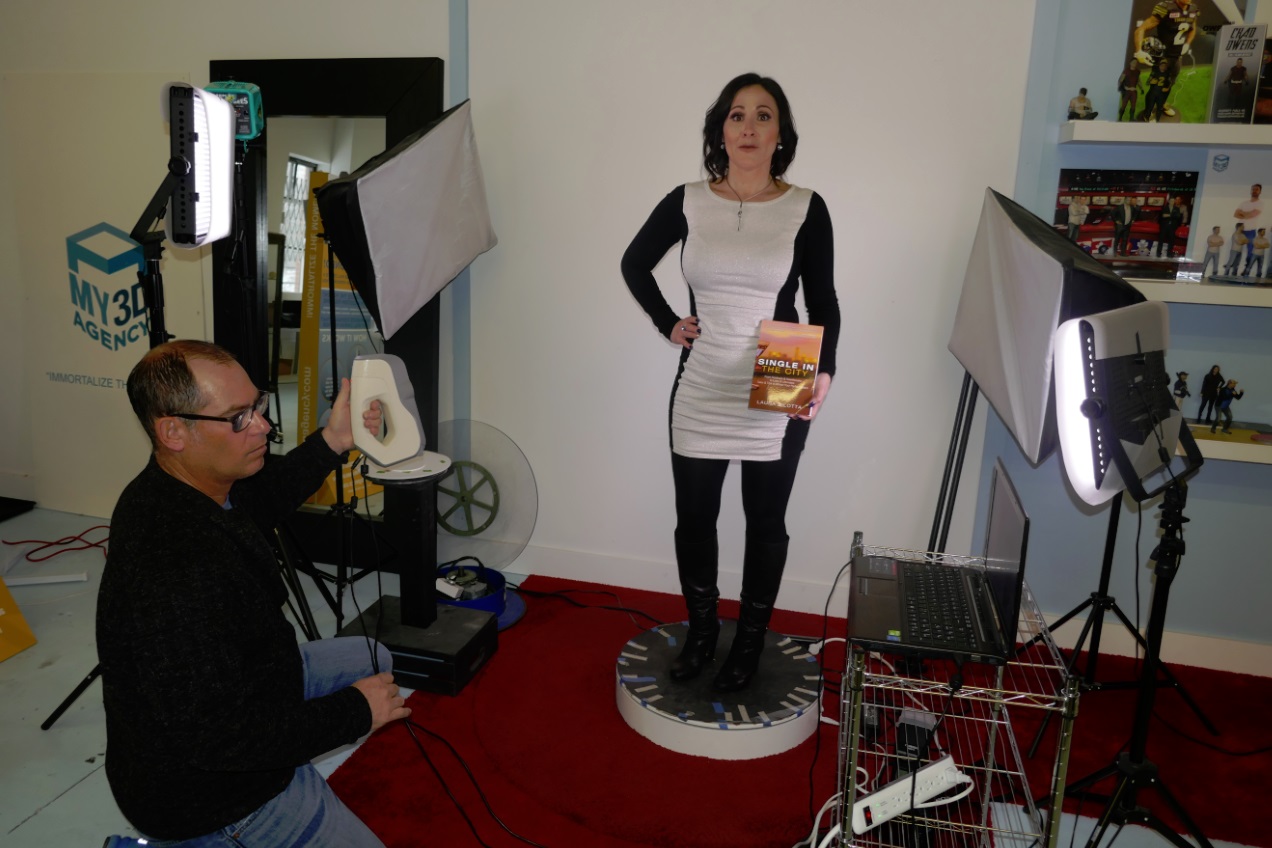 Michael Gossack scans Laura Bilotta as she holds her Single in the City dating advice book.

Michael’s lifelong passion for 3D printing put together this mix of devices and gadgets that makes all of this possible about three years ago. He’s only just moved to this new spot six months ago, and now he’s going hard 3D printing people like me, hoping I’ll show people like you, my statue and his business.

Now I’m not going to lie; going to get 3D printed as an anniversary or Valentine’s Day gift sounds like a really awesome gift and super fun date night. 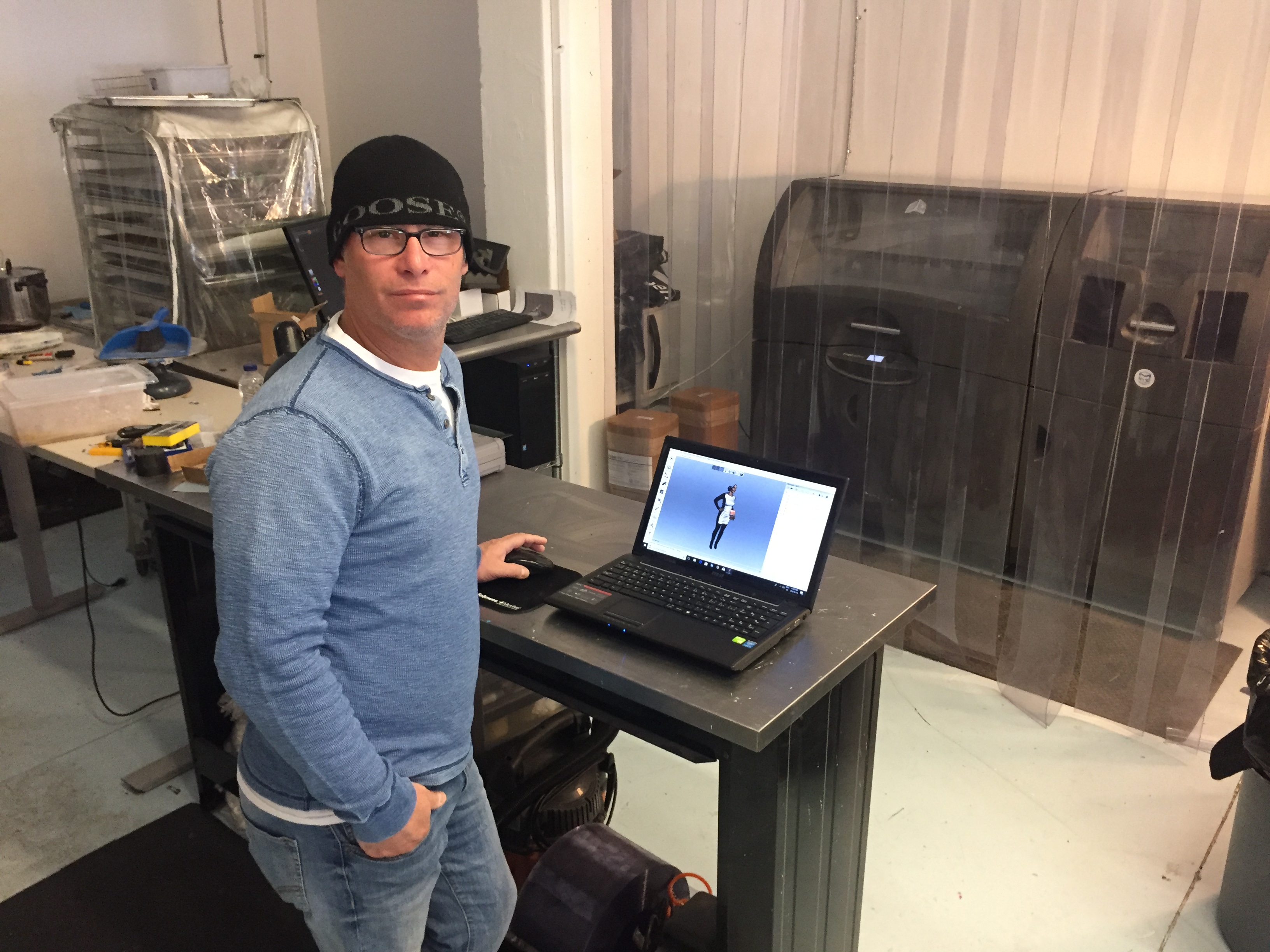 Michael is an expert at measuring people and objects with light, or more accurately using computers to compare thousands of digital photographs created by the scanner. 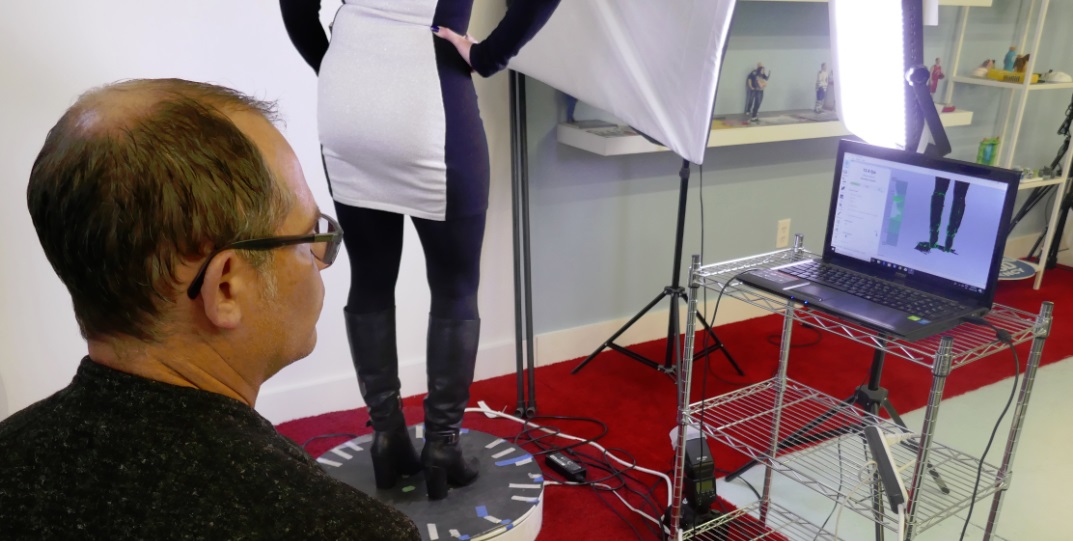 Most 3D scanning technology is rooted in the science of photogrammetry; a crisp light is bounced and captured and charted in photographs, and by using computers to calculate the differences in these photographs you can measure and replicate the tiniest details in the subject. I know, I know, you don’t read my blog for science and tech info but honestly it was just so cool! 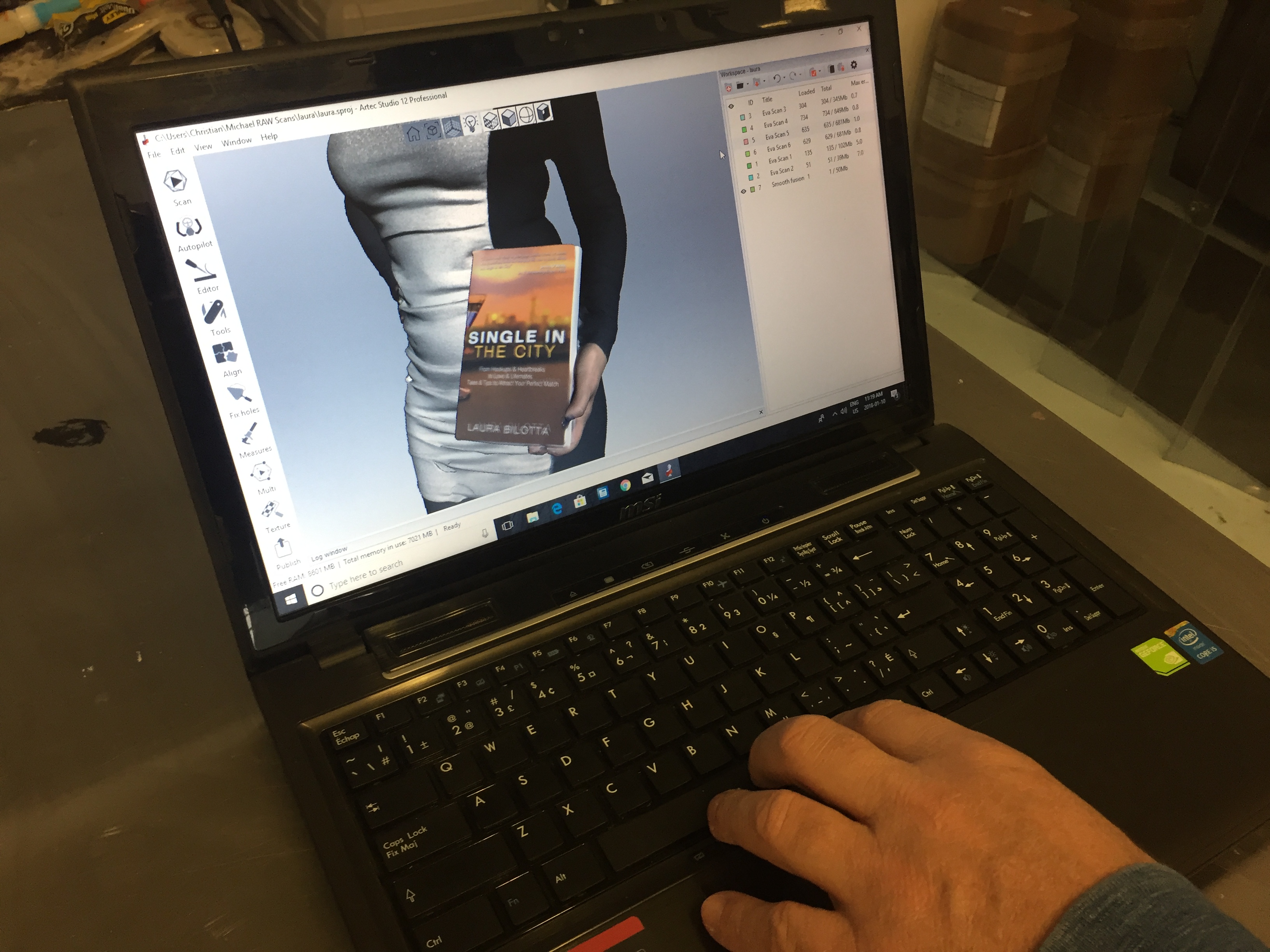 Recently, after recording the Dating and Relationship Show at Chorus on Lakeshore, I drove six blocks north to #5 Dickens St which is the lane behind the complex on the corner of Dundas St E and Logan Ave (401 Logan), you access Dickens St off Carlaw Ave. I’m highlighting this location because this area is infamous for accommodating cool event rentals businesses, tech startups, custom bicycle shops and fly-by-night film and TV production offices. The area may not look like much, but its actually a very creative and hip part of Toronto with an amazing vibe.

Inside MY3D Agency I met Michael and got an eye on some of the other people he’s printed, projects he’s done, and the campaign he’s doing all this month and spring 2018 with Campbell’s Soup.

When everything was ready, I stood on a rotating platform and tried my best to remain motionless for what seemed like forever, maybe five or six minutes. People, remember when you pick your pose you have to hold it for an eternity. So think twice about making a cool gesture in the air with arms extended; unless you can you hold your arms up, motionless, in front of you for six minutes. Go on, try it, I’ll time you.

After finishing with the hand scanner, MY3D Agency went to work preparing the 3D file and getting it ready for the printer. Anyone not entirely thrilled with their real life body shape can beg Michael for certain amplifications or reductions as needed during this phase. He doesn’t like doing it though; he’s a professional after all. Thankfully I didn’t need any such changes and my 3D image file and figurine is exactly to scale in every respect. 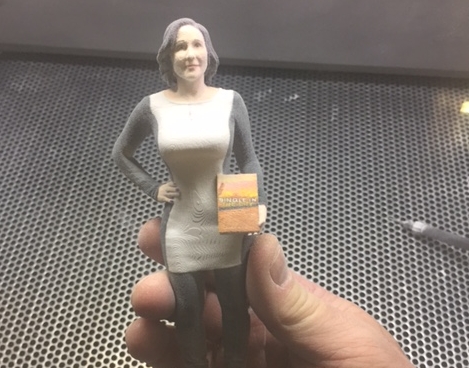 MY3D Agency sends your 3D PDF straight to you – then you can keep your data in its database in case you want additional copies made (or you can request that your data be deleted).

The object is made out of gypsum, the main ingredient in blackboard chalk and drywall. When used in 3D printing, the gypsum powder is sifted down to dust and the smallest possible grains are electrocuted to become polarized so they flow through the machine better and are better aligned on the object due to the polarity of the print envelope. Its all very scientific as the nozzles on the print-head spit out tiny particles which stick to the figure and slowly, one pass at a time, layer upon layer, the object takes shape.

MY3D Agency’s ProJet 660Pro 3D printer takes three hours to make a full colour six inch statue. But let’s think about all the stuff that has to be in that machine – the gypsum and some goop to make it sticky, and three colours of ink plus a mordant and all of the moving parts coordinated by software to get everything positioned perfectly. Its rocket science in a box. 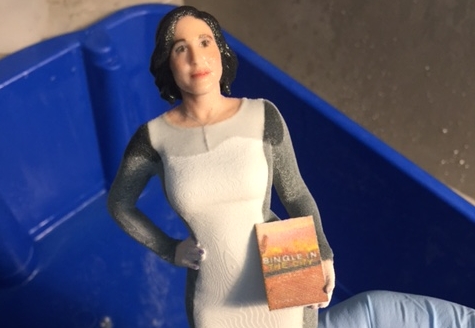 Finishing the piece is another place where Michael’s scientific mind and experience helps make it a better product. MY3D Agency stocks specially selected hydrants and chalk sealers which Michael applies to the figurines to cure them, and make them waterproof and much more durable and able to stand the test of time. After four separate treatments, my 3D printed figurine will keep its sharp colour for centuries.

How much does this cost? 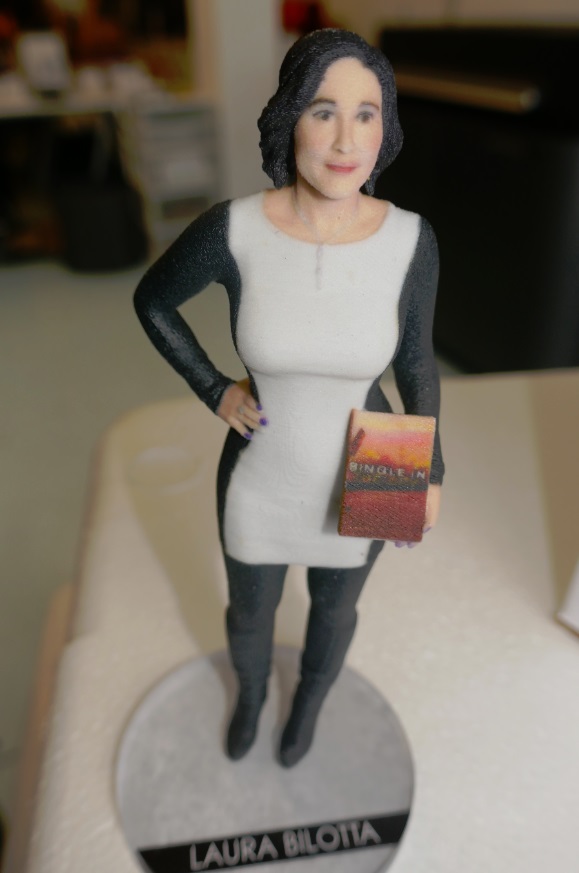 Want to get a life size 3D printed statue?

The ProJet 660Pro is used for projects up to about three feet tall, so the same 3D print file that was used to make a six inch statue would still be used except the print would be done in pieces and then assembled. Depending on how big the subject is, a life-size statue can cost up to $75,000!

What am I going to do with this statue of myself?

Well it’s now become the centerpiece of my desk, I get to look at it and remember all the exciting things that happened to me and Single in the City in 2017. And its inspirational, and makes me hopeful for the future of my company, and the adventures yet to come. That’s the true purpose of this tiny lifelike object; it’s a totem to remind the subject that they matter, and they are loved.