Love Story at Single in the City

Love Story at Single in the City

You can’t plan for love. You can’t force love to happen. But when it strikes you, love lives up to the hype.

One of my favourite things about being a matchmaker and the owner of Single in the City is that real-life love stories play out in front of my eyes every now and again, reminding me why I got into this business twelve years ago.

Single in the City’s speed dating events provide Southern Ontario’s singles with many things, including career changing networking opportunities or something as simple as an enjoyable night out. But quite often we throw an event, and love happens.

I recently received the following email from a couple of former Single in the City speed dating event attendees. They first met at an SITC Speed dating Toronto Event back in November of 2012. Here’s what they had to say:

We (Christopher and Anna) are writing in order to thank you for your fabulous “Single in the City” events. We first met during one of your events on November 28, 2012, at Awtash. We have been together since then and on May 10th he proposed!!!

I was going to cancel because last minute my friend fell ill and decided not to come. However, it was one of those rare occasions where I wore a skirt and straightened my hair, so I decided to go alone. I got a coffee at a nearby cafe and made my way to the event. While filling out forms, Christopher approached me and asked me where I got my coffee, so I told him and thought nothing of it. When he came back, he asked if he could sit beside me. I noticed that his coffee lid was securely opened while I had struggled with mine. So I looked at him, moved my coffee towards him and said “I see that you’re talented, do me!” and he looked at me, smiled and asked “You mean, put your coffee lid up?” Being the smartass that I am, I responded with “I know what I said!” And that is how it started.

Here we are as happy as ever and planning our wedding. We just wanted to give you guys a shout out and say thank you for bringing us together!

I’m extremely happy for Anna and Christopher, and I’m overly thrilled that Single in the City provided a small, yet defining moment in their life story.

That’s the funny thing about life: You can’t predict when love will call your number. And that’s the beauty of it — we search for love with expectations of being swept off our feet without ever truly knowing when the one will appear out of nowhere and change everything for the better. Then it happens. 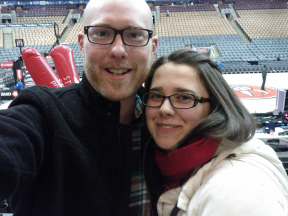 Single in the City success story, Anna and Christopher.

Anna took a chance. She went to a speed dating event by herself because she’d already straightened her hair, put on a skirt, and she wasn’t going to let her friend’s cancellation stop her from having the night she had promised herself.

Christopher took a chance, too. He took a chance by attending the event. He took a chance when he asked Anna where she purchased the coffee she was drinking. Sometimes a simple initiation of conversation is all it takes. They connected instantly. Now they’re planning a wedding.

Their story is unique, and wonderful. And it’s the type of love story that I am lucky enough to witness as the owner of Single in the City.

I say this all the time, and it’s the truth: people who come to speed dating events tend to be mature and genuine about their intentions to meet someone and form a lasting relationship. Anna and Christopher attended a Single in the City speed dating event on November 28, 2012. Each arrived alone, and now they have each other.

You too can have your own love story, visit one of our upcoming singles events in your city; you never know who you might meet!