Rudeness Is The Weak Man’s Imitation Of Strength

Rudeness Is The Weak Man’s Imitation Of Strength

I met J through Bumbl and was excited to meet him! We had an engaging phone conversation. He came across as smart, thoughtful, with a social conscience and articulate. He said he was kind and loyal. I was really hopeful. He also wanted to learn more about and complimented me on my mental strength and physique (running, cooking, knitting).

We met on a sunny Fall weekend afternoon after my mindfulness meditation. I was in a great mood. We decided to walk to Kensington Market. Within the 1st 5 minutes of meeting him, it became apparent he suffered from a strong, overwhelming case of halitosis! But I decided to grin and bear it. I think it’s impolite to mention something like this. 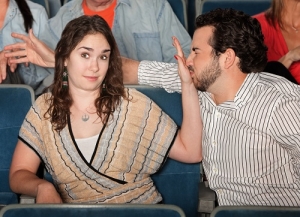 The walk to Kensington Market was very pleasant and I still thought, he is smart and thoughtful, so there is still hope. He seemed very taken with me and was smiling, caring and interested in who I am. Once we arrived, for some reason, could be it was after 1pm and my appetite was stimulated after the 20 min walk, I suggested we grab a bite to eat. He agreed, I suggested the arepa place, he said he didn’t want arepas but he knew what he wanted to eat and headed to a pizza place. I was astounded that he not only decided without consulting me, but went straight ahead and ordered without asking what I thought!

When he finally ordered his food and asked me, I looked at him in horror and said, ‘I’m sorry, but I don’t like this food’. He was unfazed. In the end, I watched him eat lunch as my stomach was growling. I still kept quiet and smiled. But like The Smiths once sang, Bigmouth Strikes Again! I just couldn’t stop myself from ranting on the fake cheese! That was sooooo bad on my part and I realized it, but like verbal diarrhea, I just couldn’t stop. It was a horrific Lorelei Gilmore non-stop talking without the wit! I’d like to say hunger made me cranky, and as much as he was rude and impolite for eating as I watched, I was equally impolite.

His demeanor changed. The switch inside him changed. What had once been caring behaviour and interest in me, turned into abject contempt and disdain towards me. The rest of the date was awkward. What I once viewed as socially conscious man, turned into a morally superior man with snobbish views and purchase habits on food.

He still asked me to walk with him back to where he had locked his bicycle, a 20 min walk away. I looked at him and smiling politely said, ‘But I bought meat’ (yes, we still hung out and I bought meat and he bought expensive groceries in one of the local health stores). That was my reprieve from further sharing my breathing space with his halitosis!

On my way back home, I felt deflated and contemplated what a possible date with him would be like. It didn’t fill me with joy. I thought I would have to tell him I had concerns about our different food habits and how that could impact dating. But, the heavens intervened and hours after I arrived home, I received a text message from him saying he felt no connection with me! Whoo hoo! Bigmouth lives for another day!

Well, first of all, it is beyond rude not to consult your date when deciding on food.
Actually, it’s worse than that. What’s the point of meeting up if you’re just going to do what you want to do without any consideration for the person you’re with? Clearly used to being alone and likely going to stay that way. I just can’t believe anyone has to be told that. Seriously, that’s not even dating 101, you should go into dating knowing that, it’s a prerequisite! Run, don’t walk away from someone like this.

In the end, hungry or not, if your date is as inconsiderate as this guy was, you don’t
have to sink to his level, you don’t even have to stick around. Personally, I would have said, ‘I don’t eat pizza, let’s find a place we both like.’ If he insists on pizza, you can take that opportunity to part ways. You can tell him you really have to eat, so, maybe you should call in a night. By this point you know you’re not interested. You don’t have to endure, it’s a two way street, you’re both supposed to enjoy being with each other, that’s the point of dating.

I am confused though as to why you thought you would be put in a situation where you’d have to tell him you had concerns about how your different food habits would impact your dating future. If he was showing you disdain, he wasn’t interested in a second date either. Nobody has to tolerate being treated inconsiderately. Talk about your red flag – this one was waving frantically.

Finally, halitosis, that’s unfortunate, I’m sure he isn’t aware of it. So, a good rule of thumb for everyone, is to have some form of breath freshener on you and make use of
it. Halitosis can be a huge turn off, but don’t throw the baby out with the bathwater, it doesn’t make someone a bad person. Dismissing someone outright just for that could cost you an amazing relationship – obviously not in this case.