Singles Pizza Making Night happened again on Thursday the 30th March 2017 on what turned out to be an unseasonably snowy evening in the Corktown neighbourhood of Toronto. As large snowflakes fell on the street outside Basso Pizzeria at 320 Queen Street East their wood fired pizza oven warmed all participants’ hearts and minds and set our stomachs preparing for a feast.

The staff at Basso Pizzeria were ready for our crowd and they soon had their pizza oven up to temperature; the wood smoke was tingling in the air when guests began arriving at about 6:30 pm.  That lovely smell is what set my appetite on fire, and the good wine and exotic ingredients that we brought to the event were additionally compelling.

The cozy little pizza restaurant is also a wine bar, and offers a huge selection of craft beers on tap. The venue had an extra staff member on hand that night to help get everyone drinks and direct them into the dining room where the tables were arranged in an L shaped pattern awaiting participants.

Raymi the Minx was one of the surprise attendees that evening, lured to the scene by the generous cheese tray donation from Cheese Boutique.  There were twelve different types of cheese cut into perfect cubes and wedges for nibbling and slices for pizza builders. Raymi soon became the in-house cheese expert and helpfully stationed herself near the overflowing tray. There’s more details about the individual cheeses and Laura Bilotta at Singles Pizza Night on Sharing Toronto magazine.

The dining room at Basso Pizzeria has a flat screen television on the wall showing a digital facsimile of a fireplace, and when combined with the smell of the wood fired pizza oven it really works to set the mood.  Additionally, everyone noticed and many folks remarked on the high quality oil paintings done by local artists on the wall. On this evening, the lights in dining room were full up, and what’s normally a quiet and subdued room was that night loud with Singles networking.
The meet and great lasted until 7:30pm when Laura welcomed the members and introduced Chef Cortland who took the opportunity to teach the assembly how to make pizza dough from scratch. While everyone watched in near amazement he then showed us how to spin or roll the dough into perfect circles and that’s what happened next.

The group pizza making exercise spontaneously started as everyone found space to roll dough and ladle sauce. That melee was followed by everyone selecting pizza toppings and then inevitably, there was a bottle neck at the pizza oven. But the delay that happened as everyone waited for their pizzas to cook only gave participants more time to mingle and chat. 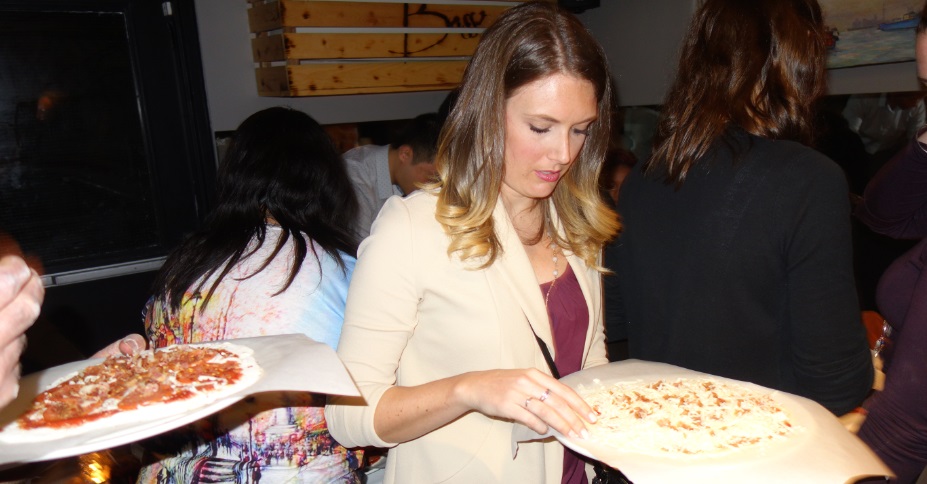 One by one the pizzas were put into the red-hot oven by Courtland, and minutes later the master chef returned the perfectly cooked cheese pies to their creators who were then encouraged to share and compare and box up what remains for another day’s meal. 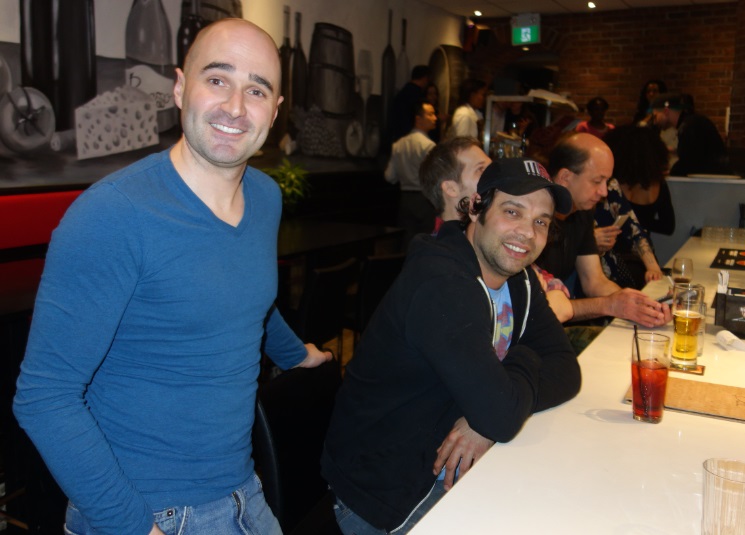 The party ended with great fanfare as prizes were bequeathed to the singles who completed their survey sheets and the bar became a conversation cafeteria with everyone enjoying their custom handcrafted pizzas.

Chef Cortland did a masterful job cooking everyone’s pizza pie and Raymi soon took over as the DJ.  These cheese from Cheese Boutique was exquisite and many people were putting whole squares into their pies.  My own pizza was amazing and if you follow me on Instagram you’ll see my pizza portraits.

The evening was once again a big success, and when it was all over, Sam Spartan the other co-owner of the restaurant approached and told us that he’d like to have Singles Events happen there once a month.