Recently on the Dating and Relationships Show, I brought on Eric Pierni from Men’s Therapy Toronto to discuss male issues and how the standards of masculinity have affected the male psyche.

We all know men are constantly pressured to live up to society’s standards of what a “real man” is, but how does this affect them in their relationships? Eric Pierni tells us all about the most common male issues from emasculation, to sex addiction, and effeminate behaviour.

As a matchmaker and dating coach, I’ve always recognized emasculation as a common male issue that creates a divide within many relationships. In a heterosexual relationship, if the woman does not make her male partner feel needed or make him feel like a man, he may respond negatively. I’ve personally seen this happen to many couples where I’ve once known the man to be a strong, dominant, and confident force. A few months into the relationship, the man transitions into this passive and submissive individual due to his strong-minded female counterpart. Nevertheless, when bringing this male issue up, Eric corrected me and said “ a woman cannot emasculate a man, only the man can emasculate himself”. He went on to further explain if the idea were that you could emasculate a man, that would mean for him to access his masculinity, he would need you to do something different. It’s essentially similar to stating that treating a man like man is what makes him a man, and doing the opposite is emasculation when in reality that feeling of adequacy needs to come from within the man, and not from how others treat him.
Eric says in today’s post-patriarchal world the two extremes men try to follow is continuing the legacy of the domineering, “macho” man, and the new-age man that doesn’t conform to “masculine” expectations. Although both appear extremely different, what they have in common is the shame and fear of truly being themselves. This is where Eric says his work begins; getting men to empower themselves by taking masculine ideals and incorporating them in a way that is tailored to each individual.

Back in the day, the relationship between a husband and wife included a power dynamic where the husband made all the heavy decisions and the wife was the secondary supporter. Now in relationships, the concept of husband and wife no longer means what it use to; there is a new system of equality in partnership and it’s left men very confused. We’ve done excellent work on young women and growing them to be strong and independent, however, we haven’t taught men how to healthily co-exist with the new-age female. 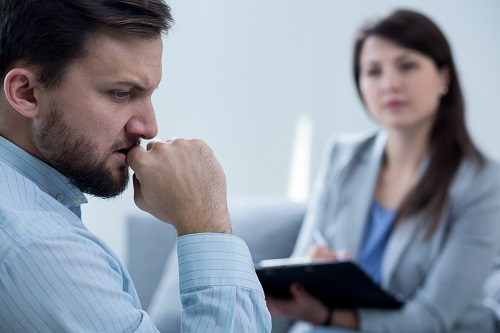 Often when asking men how they feel as a man, Eric gets responses like “ I feel inadequate” or “I feel like a boy”. Many times these men will act out from fear by taking on effeminate behaviour or even sex addiction. Eric explains effeminate behaviour as a coping mechanism men use when they feel emasculated. Without any correlation to their sexuality, they will act more feminine, rather than trying to hide behind acting masculine. The only problem is, with effeminate behaviour, many men begin to question their sexuality as a means to rationally understand why they don’t not act masculine.
Another common symptom from emasculation is sex addiction. Many men become obsessed with watching porn or paying for sex because they cannot confront the reality of being physically and emotionally intimate with a serious partner. When trying to have sex with a woman they are interested in, many men will experience erectile dysfunction due to the shame of not feeling “man enough” for their partner.  This male issue results in sexual desire only being played out in a manner that enables the man to detach himself from any sort of intimacy; ergo porn and prostitutes.
All in all, Eric explains that these male issues do not simply occur because men don’t know how to ask for help or talk about their issues but simply because they don’t have the resources to do so. He says majority of the psychotherapy industry is reigned by women which is why he’s created Men’s Therapy Toronto. He wanted to create a safe space specifically for men and by men, where they can comfortably talk and work through their issues.
If you’d like to hear more from my interview with Eric, you can access the show from this link: http://globalnews.ca/toronto/program/dating-and-relationship-show
Tune in to the Dating and Relationship Show Sundays at 9pm on AM640!!