The Winner’s Guide to A Better Breakup

The Winner’s Guide to A Better Breakup

When I started writing my dating advice book two years ago, it was during a time of real personal upheaval.

I’d just gotten out of a poisonous two year relationship, and had moved from Los Angeles back to my hometown in Alabama to regroup and lick my wounds. (Metaphorically, obviously. I do not endorse actual wound licking as a curative to heartbreak.) Like any painful breakup, it took some time to get over, even as my rational mind knew that it was for the best.

Conventional wisdom (the citation-absent wisdom practiced by the mysterious, unnamed “they”) says
that there’s an acceptable amount of romantic grieving. “They” say that getting over a relationship
takes about half the time of the relationship itself. Based on this goofy arbitrary logic, if you just got out
of a ten year relationship, strap in. Your next five years are going to be rough.

Suggesting that moving on from romantic dissolution can be acceptably standardized in this way is
obviously ridiculous. Everyone deals with grief in his or her own way. That said, however long it takes
you to move on, it’s absolutely possible to forge success from the ruins of most failed relationships. For
those dealing with the fresh hurt of a recent breakup, this idea will seem like madness. I completely
understand. Had someone suggested that the soul-sick anguish I felt shortly after my last breakup was
somehow a success, I would’ve greeted them with a stare so icy it could reverse global warming. But my
initial certainty that the world would remain a joyless void (exclusively soundtracked by the music of
Morrissey) eventually dissolved with the aid of time, loved ones and an excellent therapist.

(It’s worth noting at this point that I am not a therapist myself, and my advice (no matter how well-
reasoned and cleverly-phrased) isn’t a substitute for proper therapy. I’m a writer, and an impoverished
one, so suing me for bad advice is as likely to make you rich as trying to wring diamonds from coal with
your bare hands.)

Legalities addressed, I can share with you something I’ve learned, both through listening to friends and
my own personal life: with a few extreme exceptions, the success or failure of your past relationships is
your responsibility. Before you protest, I’m not suggesting that you’re to blame for the collapse of your
past relationships. In fact, fixating on assigning blame at all is both silly and potentially destructive to
what really matters: your future happiness. Instead of interrogating past relationships like a prosecutor
eager to punish the guilty, examine them as a coroner might, dispassionately and with an eye toward
seeking out the root causes why things didn’t work out.

I know this isn’t easy advice for those still feeling the sting of a break-up, but the more distance you get
from that hurt, the more you’ll be able to view your romantic past with the objectivity necessary to
transform those painful memories into valuable insight. Unless you repeat the same mistakes over and
over, each abortive love connection can help reveal or clarify who you are, what you want, why and how
you choose your amorous partners, and what you really need in a relationship to be happy. In most
every case, there is something valuable to be found in the (hopefully only metaphorical) rubble of our
past relationships. And while these discoveries are unlikely to correct the past, they can significantly
improve your chances of success when you’re ready to try again with someone new.

So if you’re still harboring cynicism, self-pity or bitter regret after losing someone, it may be time to turn
that frosty glare inward. To quote my own book (I know, it’s super-obnoxious, but it applies nicely here), “experience without introspection yields no wisdom”.*

Blue Sullivan is the author of the recently-released dating advice book, Your Ex-Boyfriend Will Hate This,
available here via Amazon. 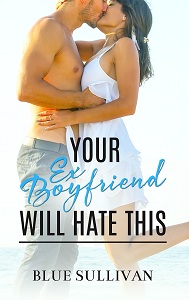