Not all Toronto men are shy guys, but many certainly are, which becomes noticeable to us ladies when we travel out of town.

I have a friend who often ventures around the country for work, and she claims that men approach her much more frequently in places like Montreal, Halifax and Ottawa. Meanwhile, here in Toronto, a lot of guys seem to be more shy and reserved; more hesitant to strike conversation with a random woman while out in public. Is it true? To some degree, it probably is.

Conversely, Toronto is a big city, world class, and full of confident men who will flirt with women in public despite my friend’s observation. I have a guy friend like this, named Jerry. He can pick up women anywhere he goes; he understands the pickup game well. And it just so happens that this friend of mine has travelled all over the world, too. He wholeheartedly agrees that picking up women is more difficult in Toronto than in most places he’s visited throughout Europe, Asia and Australia. He’s not 100% sure why the GTA is a tougher place to break the ice, but he believes trying to pickup in Toronto is good practice before traveling. He says: “Once you’ve figured out how to pick up women in Toronto, you will have success anywhere you go.”

According to The Grid T.O., it’s more than simply a shy men problem that plagues Toronto’s pickup culture. They posted an article in 2012 stating that we like keep to ourselves here in the GTA. The article claims: “Torontonians are reserved when it comes to displays of spontaneous, romantic interest, lacking the requisite ballsiness to approach a stranger.”

Others suggest that there are simply too many attractive women in Toronto. This wealth of good looking 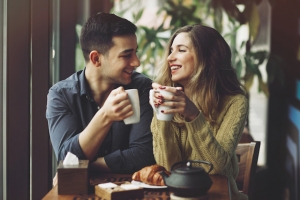 ladies has caused men to act less aggressively while pursuing a date, simply because Toronto men don’t feel as much pressure to hit on the next gorgeous gal they see, knowing they’ll encounter several more on a regular basis.

Another theory suggests that Toronto men are more shy about approaching women than men in other Canadian cities because the GTA is a very business oriented place, where young professionals are more worried about career advancement than perfecting the art of picking up. After all, Toronto is an expensive place to live. And if you’re so focused on paying bills and mortgages and career advancement, chances are you’ll be stressed, making you less likely to loosen up and pickup women at the coffee shop, restaurant, shopping mall, etc.

I love Toronto men, and I don’t mean to single them out. Every town has its charmers and its shy guys. But there is definitely a shyness element to many guys here in T. O.. I don’t see much grocery store line or subway ride pick ups going on these days. That’s Toronto. It’s a terrific city full of wonderful attractions and night life options, but while you’re out and about on a regular day, it’s business as usual.

If you’re looking for a place to meet singles come out to one of our events! The best thing about Single in the City events is everyone is there for the same reason! You don’t have to worry about playing the games that go on at bars and get to meet singles in a fun, classy environment.

What’s your theory on why Toronto men are less aggressive pick up artists than men from many other Canadian cities?