Wednesday the 24th of May 2017 was a red-letter day for Single in the City. We pioneered a new digital enhanced Singles event for web-savvy men and women to meet and mingle both online and in person in a specially tricked-out restaurant venue. 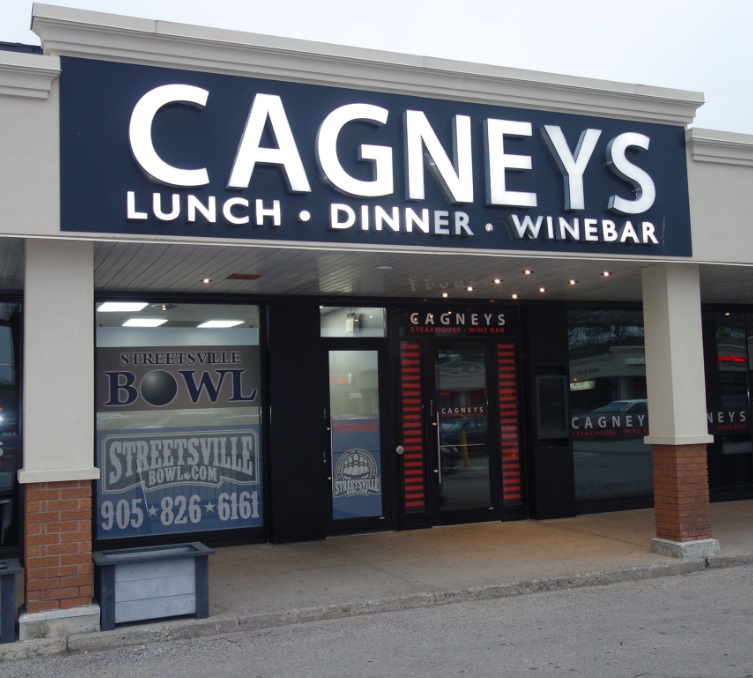 Tweetsteria, our new smart phone assisted Singles trivia game was tried and tested and proved truly amazing at bringing people together at Cagney’s steakhouse and wine bar in Streetsville.

Co-produced by DRMG, Direct Response Media Group through their sister agency Surround Digital Marketing, the evening went as planned with two laptops set to propel two separate display systems. The first computer commanded the TVs in the bar to show the questions, while the second system was programmed to show the #tweetsteria tag Twitter feed.  Participants would read questions on one screen and research and race to answer on Twitter in hopes their tweet would appear first on the game screen.  First correct to appear won a crisp $20 bill. The program grew more and more compelling as the evening progressed and the big winners stacked twenties on tables already crowded with free food and beverage prizes.

Tweetsteria’s May 24th Mississauga debut had two hosts. Laura Bilotta the founder and CEO of Single in the City was the point woman of course, and beside her dispensing the cash was the infamous Raymi the Minx, who grew up in Mississauga and was in some sense giving back to the community that night.

Raymi actually knew some of the answers to the local trivia questions without having to look anything up on the internet.   She knew that Mayor Hurricane Hazel McCallion was in office for 36 years in total for example, but Raymi was gracious enough not to reveal the answer before others had a chance to enter.  The Minx also knew that Mississauga doubled as Detroit in the 2014 movie RoboCop. 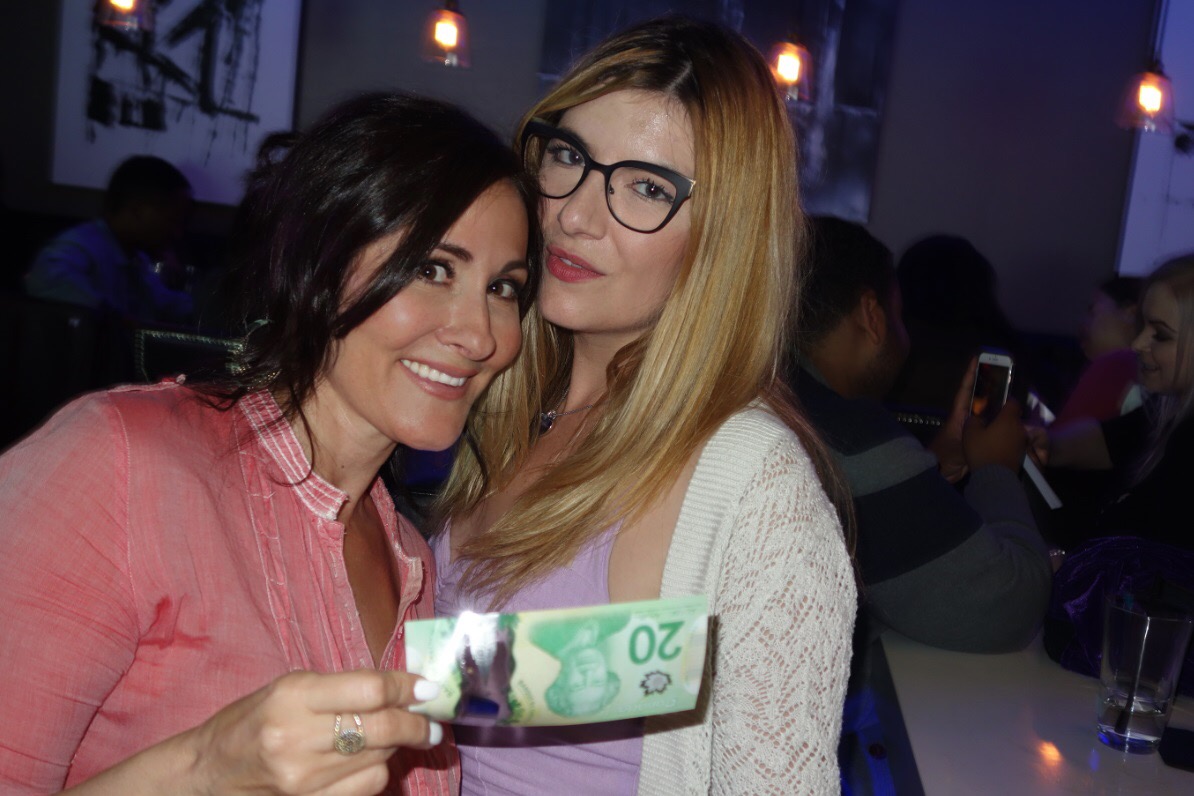 How Can Single in the City Afford Such Generous Cash Prizes?

Tweetsteria is a business sponsored singles-orientated trivia game which means some of the questions were advertorial.  These queries asked players to research facts pertinent to the sponsor’s enterprise, and it was these businesses that coughed up the cash to reward the players that night.

Tweetsteria’s sponsored questions ranged in difficulty from the Latin name for Black Nightshade, sponsored by Weed-a-way a lawn maintenance service business in Mississauga, to ‘Name the insulation material found inside most thermal insulated windows?’. sponsored by Thermo-Bilt Windows and Doors, the answer ‘argon’ was deemed to be the second hardest challenge of the night. The absolute hardest task asked participants to find the longitude of Cagney’s wine bar. 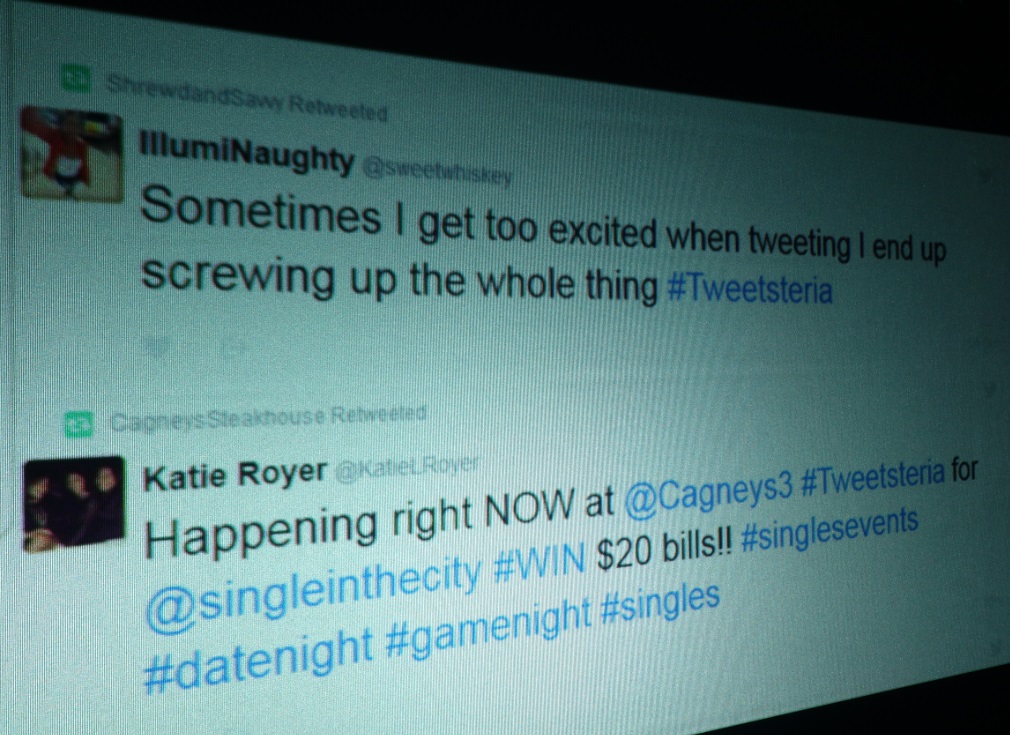 The first Tweetsteria had some glitches too of course, and at least one sponsored question went unanswered or rather the winner was ‘undetermined’ (everyone answered).   The question, who is the closest Master Mechanic? caused some issues, despite being a simple request.  It turned out everyone’s Google maps programs issued slightly different results than the official answer ‘Jack Hall’ (which was correct). 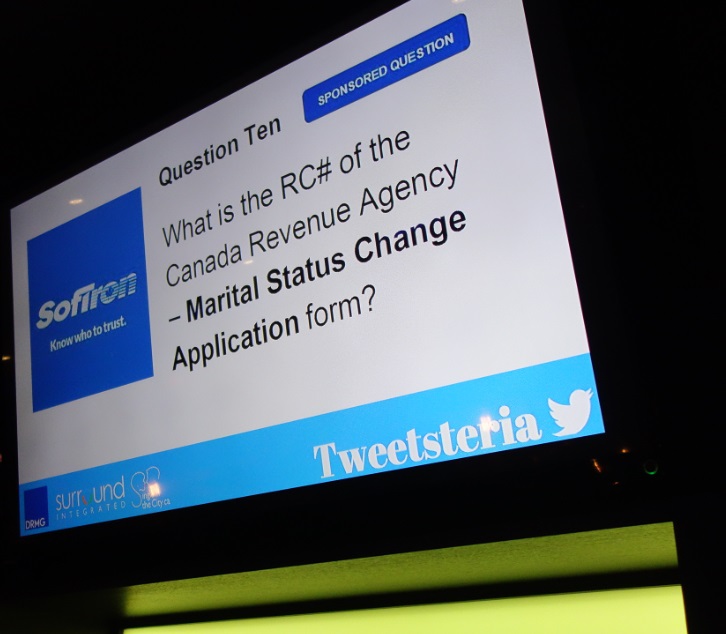 The question for Joseph Zayouna, a personal injury lawyer in Mississauga was changed at the last minute because it was deemed to be too difficult, and not on brand for the evening or their business. Personally this author wishes it had remained in place. The original query asked the profession of a personal injury claimant in a landmark 1978 Supreme Court of Canada case which established maximum settlement guidelines. Do you think that question is too hard? Maybe it is, but the question that replaced it was too easy; which Canadian University did Joseph Zayouna attend before taking the bar? (York University in Toronto)

A good example of a perfect sponsored question was put forth by Softron Tax which has their head office in Mississauga. Asking the RC # of the form that married couples can use for increased tax deductions was perfect for a ‘Singles trivia’ challenge. The answer is RC65.

Food and beverages items were added as bonus prizes!

Little did @S_Mak know that when she correctly answered the question about flatbread toppings, with some help from her friends who happened to be sitting near an open menu, the dish itself would magically appear fresh from the kitchen a moment later. It was delicious surprise for that table of Tweetsterians. 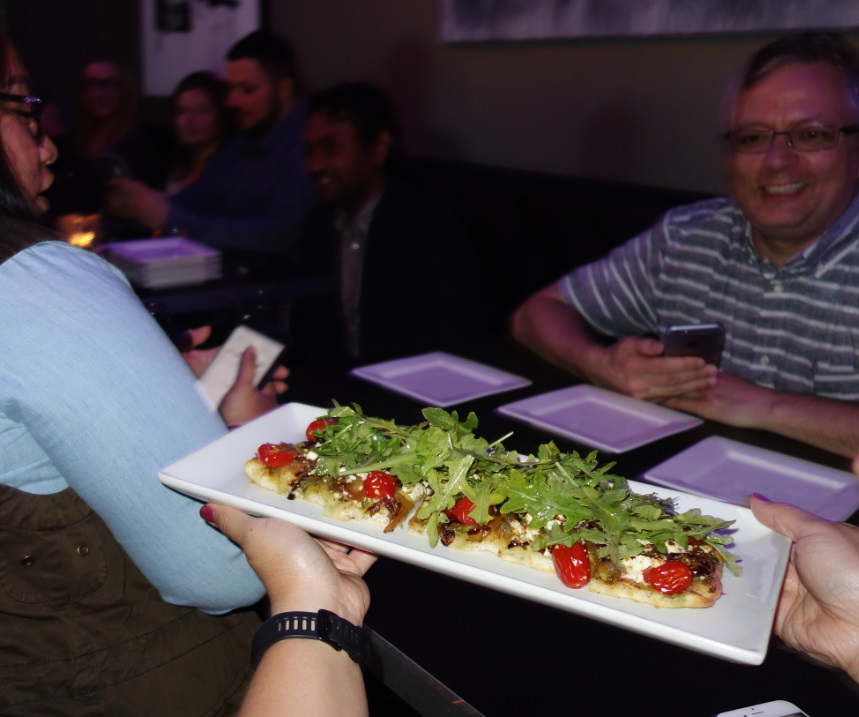 The same thing happened when @Beatrix answered Seabass to a query asking what dish at Cagney’s is cooked with Sambuca liquor? And again when @E_Ferguson nailed the name of the cheese in Cagney’s famous Saganaki (Kefalotiri cheese) another big surprise happened. 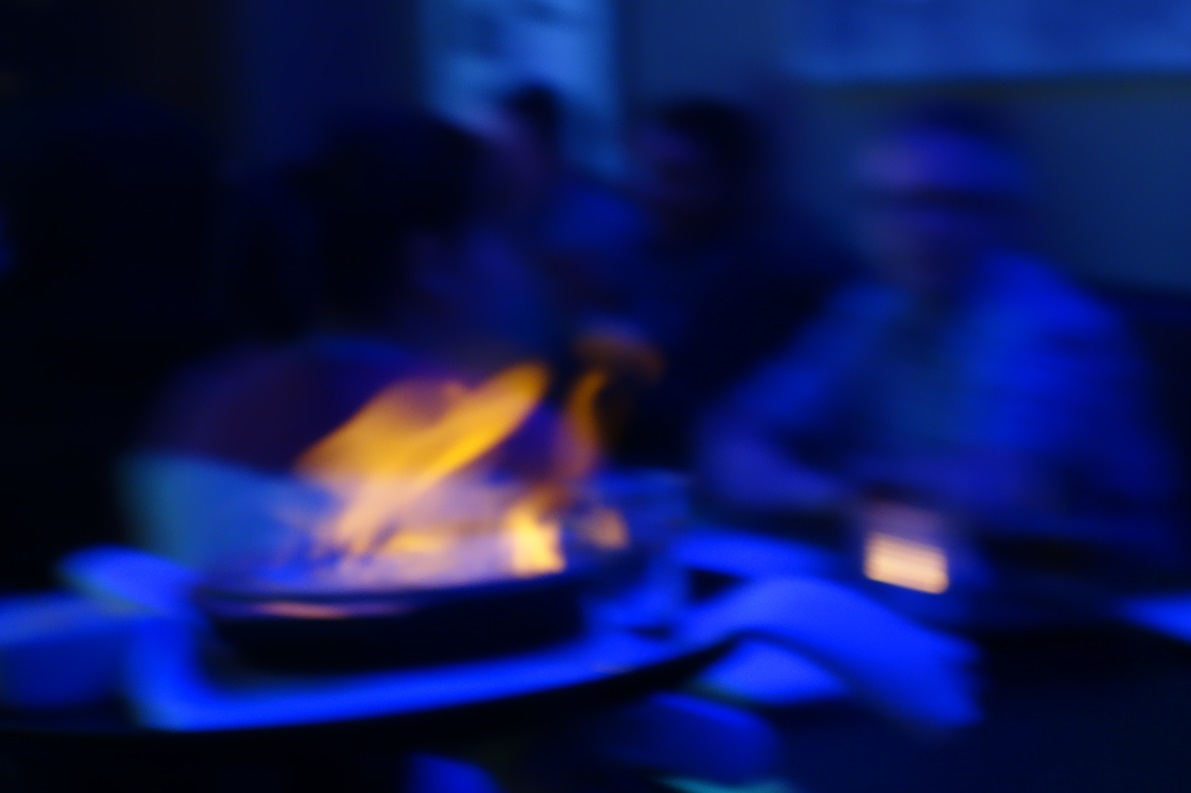 The big winner that night @S_mak3 had read the Tweetsteria prep story on Modern Mississauga magazine and had even clicked through the links in that piece to research some of the sponsors. She came prepped to win cash but  and her partner, a man she had just met that night did indeed exchange phone numbers with her afterwards, although that was probably unnecessary as these two individuals will no doubt share a strong bond on Twitter for the rest of their lives. 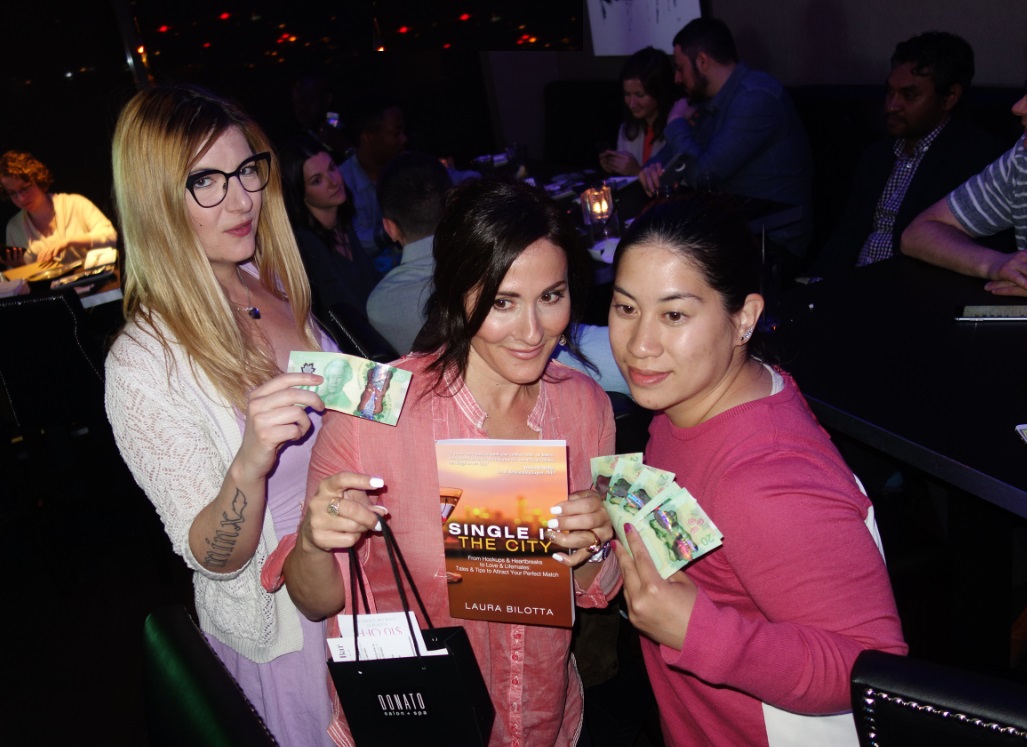 Although we’re still collecting all the data, we know Tweetsteria is a winner. The Twitter driven Singles trivia game will be now be added to Single in the City’s already outstanding line-up of unique and original Singles events for Toronto and the rest of the Golden Horseshoe.  Stay tuned for more details regarding this premier attraction in the summer of 2017.

Tweetsteria could go national! This show has legs and could easily find sponsors and enthusiastic participants in every city across Canada . Follow along on the Tweetsteria Facebook page as we grow the phenomenon. And you can also say hello @TweetsteriaGame on Twitter which is an account Laura started last week.