The Phenomenon of Women Proposing to Men

The Phenomenon of Women Proposing to Men

What’s the deal with women proposing to men?

Recently I’ve had a lot of people asking me about proposals and women proposing to men. Many traditions surrounding marriage don’t have an actual point anymore, yes they are lovely and sentimental, and I’m not suggesting we throw them all away but their practical purpose no longer exists and because of that people are starting to bend the rules when it comes to marriage and wedding traditions. This is true for proposals as well, women proposing to men is now more common than ever and is gaining steam.

Relationships nowadays are often far more intimate before marriage than ones previously. Couples usually have been dating longer, live together, and maybe even have pets and kids; their lives are intertwined. Because of this deep connection you probably know your partner’s views on proposals and marriage. Chances are you’ve talked a lot about it and maybe already decided you were going to get married, this makes the proposal more of a formality. Many people forgo the proposal all together nowadays and just decide together that they want to get married, there’s nothing wrong with 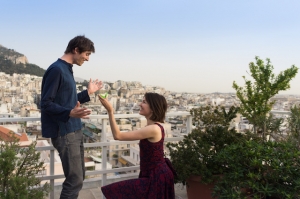 If you know someone well enough to want to get married chances are you know how they’d react if you’d propose to them. Ladies, if you propose to your man and he freaks out about it than that may be a sign that he isn’t such a great guy. Now if he politely declines because this was a moment that he was really looking forward to than that’s a different story. You should think about your partner before proposing, you know him best, if you think his feelings will be hurt than consider it carefully before deciding to pop the question.

Women proposing to men can learn from same sex couples

Navigating these choppy waters is something that same-sex couples have been dealing with for a long time, when it comes down to it the person who should propose should be the person who wants to do it, there’s no right or wrong way to do it. If you love the person you’re with and it feels right to propose to them than go for it. You’ll know it’s the right time when you feel it, if you think “I can’t wait to marry this person” than it’s probably time, it’s not fair for women proposing to men to be stigmatized like it has been.

It takes people to create a movement; women proposing to men tends not to happen because they don’t see other women doing it, once there’s more precedent for women proposing than more women will start. I don’t ever think it will be 50/50 but I do feel that eventually it will be de-stigmatized, like women choosing to keep their maiden names. Our culture is changing; with sexual orientations and gender becoming more fluid I think that even heterosexual couples will become less binary when it comes to traditional gender norms.

If a woman proposes than people may be judgmental about it and say mean things, either to their face or behind their back. They shouldn’t let this bother them but if they do care about what people think; especially their close friends and family, than they should consider if it’s worth it. I think you should still go for it if you want but familial expectation is hard to overcome. Chances are families will be judgmental about so many different decisions about your marriage and kids, so this may be the start of learning to ignore it.